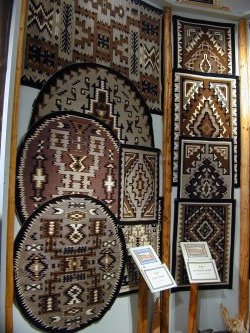 “My cousin made that one!” “My grandmother wove these two!” the local weaving ladies exclaim when they stop by the Two Grey Hills Weaving Museum at the Toadlena Trading Post. They’ve come to see our current exhibition, Generations. The show features the weavings of local Navajo families from the Toadlena/Two Grey Hills region at the turn of the millennium. It includes at least one rug from each significant weaving family with each weaver's genealogy documented and displayed along with her rug.
The work of 300 individual weavers is represented, and one can actually see the work of a great grandmother, her daughter and her daughter's daughters together for the first time. It started with the rugs. Trader Mark Winter started collecting Navajo rugs around 1985 and became familiar with the Two Grey Hills textiles from Toadlena. He couldn't understand why other Navajo rugs and blankets of much lesser quality were selling for many thousands of dollars more. Surely, the use of natural fibers and colors as well as technical excellence of the Two Grey Hills textiles would eventually make them the best Navajo rugs of the 20th century. Collecting the rugs became Mark’s passion—yet he was puzzled that the weavers were mostly anonymous, especially when many of them were still alive. The rugs needed the names of the women behind them, so Mark decided to find out more.

Meeting the weavers was the key.A journey to the reservation brought Mark to the weaving grandmothers, daughters and granddaughters of Toadlena/Two Grey Hills. Informal chats often became pertinent information gatherings about the rugs and the weavers. When Mark showed weaving grandmother Clara Sherman an old Two Grey Hills rug he had purchased years before, she claimed it was hers and took Mark to her hogan and a trunk full of old photos. One was Clara with the sensational rug, many years earlier. Toadlena beckons. Mark became enamored when saw the Toadlena Trading Post. Run down and decrepit, the post had closed in 1996 although it had been operated by a succession of traders for more than 100 years. It would be a great place to exhibit his collection, sell the rugs and learn more about the weavers, he thought. He negotiated a lease with the local Navajo Tribal Council, then renovated the post to its original character and opened for business. More and more frequently, the weaving ladies would stop by to view his rug collection and help him identify who made which piece. They also brought in their own weavings for him to purchase. Mark encouraged the women to weave larger, better, tighter and more intricately, so that he could ask for higher prices and pay them more. 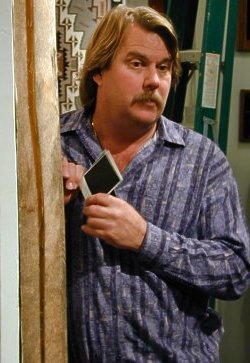 A weaving museum is born. The first exhibit at the weaving museum opened in September 1997 and traced the evolution of Two Grey Hills design by showing examples woven during the decades between 1910 and 1980. A second show opened in 1998 and featured rugs and tapestries by local weavers, including the late Daisy Tougelchee and Bessie Manygoats and their families. Daisy Tougelchee was born around 1909 or 1911 and is considered the greatest 20th century Navajo weaver, winning the Gallup Ceremonial for 25 years. According to Mark, she had the ability to spin the wool finer than anyone ever has and she could weave well over 100 wefts per inch on her tapestries. Bessie Manygoats had become well known to collectors by the 1930s for her technical excellence and elaborate design schemes. Mark believes the best thing about the Two Grey Hills Weaving Museum is that he has “brought the Two Grey Hills collection home.” We think you’ll agree.
Generations Exhibition
Call 505-789-3267 Join Our Mailing List Map, Location, Hours email
On Approval Policy | Privacy Policy | Spam Policy